I’m glad you clicked on that title…😉

Even though it’s pretty click-bait, it has some very powerful information. It’s especially useful if you’re someone who earns a low income.

It’ll show you how you can become a millionaire on minimum wage.

But it really is possible. Let me show you how…

Let me introduce you to Bill. Not Dollar Bill – just regular Bill. Short for William.

Bill is 25 years old, has no savings at all, but he also has no debt. His net worth is zero. So he’s not doing super well, but not terribly either.

He works at a supermarket as a clerk and earns minimum wage.

Now Bill knows he’s not in a good position.

Let’s be honest, nobody really wants minimum wage – it’s just not a lot of money and most people struggle to stay afloat on such minimal income.

So knowing this, Bill he lives cheaply. He cooks at home, rents a room in a shared flat in a cheap part of town and doesn’t spend money on the newest iPhone or luxurious holidays. In other words, he’s a frugal guy that doesn’t need much.

Frugality is one of the keys to saving money, by the way.

That means that he can save 20% of his income.

Someone as frugal as Bill on a higher income would be able to save much more. 30 or 50% on a six-figure salary is much easier to do. If you’re earning a high income, even 70%+ can be achievable.

However, I don’t want to make this example unbelievable, so I’m saying 20%.

To put this amount into perspective, the average American millennial spends $167 per month on coffee… so yeah. $207 really isn’t a lot of money.

But is it enough to become a millionaire? Let’s find out…

Let’s see what would happen if Bill simply invested those $203 per month into a simple index fund that tracked the market.

Assuming an 8% yearly growth, which is lower than what the S&P500 has done over the past century, by the age of 65, Bill would have… 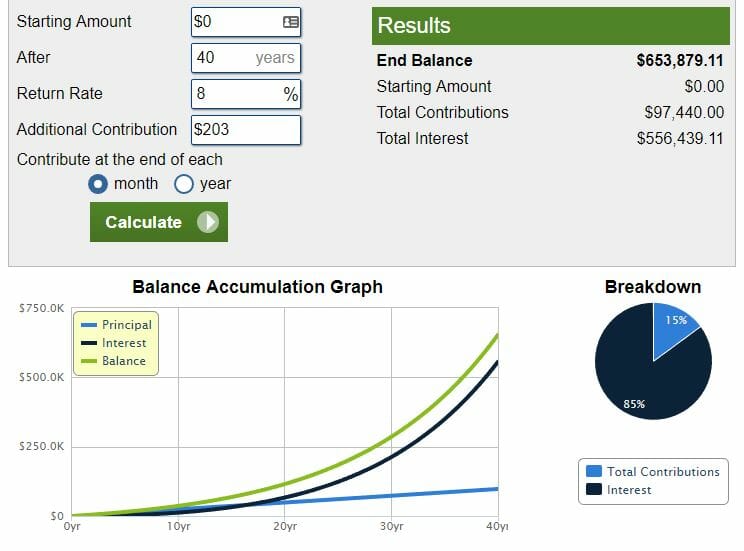 It’s not quite a million, but it’s way more money than the average person will ever have in a lifetime.

“Ha! I knew you couldn’t become a millionaire on minimum wage!”

And yes, with those assumptions maybe not – at least not during his 40-year career.

But we can do better. Let’s improve the example.

So let’s see what things Bill could do differently to get to that coveted millionaire status even on minimum wage.

I could end the article here… but I won’t.

I want to dig deeper. I want to be more realistic!

Because I know that most people have limiting beliefs about their money and how much they can achieve.

And it’s those beliefs that make them create excuses. They tell themselves they can’t do it – so they don’t.

That’s why I want this article to show you what’s possible so that you can achieve your money goals without those limiting beliefs.

Inflation is self-explanatory. Things cost more over time, so the value of money decreases.

Kids are a big source of expenses for most people, including a bigger house, bigger car, etc. I’ve factored those in.

Lastly, I’ve assumed he wouldn’t stay on minimum wage forever. I mean, who does? One thing’s earning minimum wage at the age of 25. Another one is doing so aged 50…

I just don’t see it. People earn more over time. They get more experience and promotions. They change jobs and negotiate salaries. They start side hustles that bring them extra cash.

So how does Bill fare in this new scenario?

He would become a millionaire by the age of 62.

Even with inflation. Even with the family.

And not only that, but he would’ve stopped working at the age of 50 after reaching financial independence, after which he would stop saving and working altogether.

At that point, the dividends that his stocks had been giving him would have surpassed his expenses.

To work this out I’ve used my own Financial Independence Calculator, which you can download below:

So what’s stopping you from becoming a millionaire?

Is it that you don’t think you can save?

Is it that you don’t believe the stock market can actually provide the returns that it has been providing for decades and decades?

Or maybe it’s that you don’t think you earn enough to be able to save?

When you spend less than you earn and invest it somewhere where it can grow at 8%+ per year, it’s inevitable to become wealthy… even a millionaire.

If you’ve got the saving and earning parts of the equation under control, but you don’t know how to invest, here’s the best way to get started: