Now that the holidays are well and truly over, it’s time to get back into full work mode, lose the extra padding, and get through the hardest, darkest and coldest time of the year. Yay…

It’s also a great chance to look back on the previous year and do a little review. Seriously, life just flies by as an adult – I sometimes wonder where the last 5 years went! – so it’s pretty important to savour all the great times and learn from the bad ones.

2016 was an incredible year for me. I mean that in the literal sense – I can’t quite believe it!

A little over a year ago I was a promising mechanical engineer, working for Jaguar Land Rover, engineering cars like the Land Rover Discovery – see below.

See that roof? That’s what I worked on for over 2 years! Not gonna lie – it feels like my baby 🙂

I then moved back to Spain after living in the UK for 9 years. Luckily, I managed to convince my girlfriend Harriet to come with me – otherwise, there’s no way I’d have moved back. She speaks perfect Spanish, which makes everything much easier!

After a short stint in an awful company (that I took because it was going to allow me to make the move to Spain) that opened my eyes to how ridiculous the concept of a 9-5 job really is, I became a full-time entrepreneur and started this site!

Now that it’s been 6 months since I took the leap and started doing this, I feel like I’ve come a long way. I’ve learned lots, tried things that didn’t work, perfected things that did and, above all, realised that the blogging life is awesome.

I’m in the lucky position where I get to work from home, doing something that I really love, and improving peoples’ lives in the process. Life doesn’t get much better than that, which is why I recommend that everyone should start a blog.

If want to start a blog, take a look at my step-by-step guide to starting your own. It will take you less than 30 minutes and it could be one of the best decisions you ever take.

This is what I do now. I’m an entrepreneur – again, I still can’t quite believe how much my life has changed!

I can’t wait to see what I can accomplish in the next 6 – 12 months. As Chris Guillebeau says in his A Brief Guide to World Domination:

I’ve found that being my own boss is hard. While in my 9-5 jobs I was often happy to do very little work (as long as it appeared that I was working!) now I am super demanding with my own work.

There are days that are just pretty unproductive – days when I fall down the rabbit hole of article-reading and youtube watching.

When you zoom out a bit and look at the bigger picture, a bad day doesn’t really affect the end results – at least not too much.

I’ll write a “2017 Goals” post in a few days because today I want to reveal how I got on with my End of Year Goals. Gotta end one year before we can start with the next!

End of year goals – The results are in!

Back in October, I decided to go all out and set myself 6 goals to progress this website. Since there were only 3 months left in the year at the time, I wanted to strike the right balance between difficulty and achievability.

Now that the results are in, let’s see how I did…

1. Reach 100 unique visitors to my blog in one day: SUCCESS

A business based on a website cannot work if people aren’t visiting the site! #notrocketscience. I set myself this goal because 100 seems like a good amount of people, as arbitrary as it sounds! 😛

Before I hit 100 visitors in a day and accomplished my goal, something annoying and funny happened – in that order. Sometime in November I suddenly got a huge spike in traffic.

My first reaction? “OMG! I’ve been featured on a massive site! Someone has finally deemed my content good enough to be shared! I’ve made it! Get your coat, we’re going out to celebrate!”

I then looked to see where the traffic was coming from:

Ok – one of two things was going on here:

After digging a bit around the web I found that many other bloggers were getting the same huge, fake traffic spikes. So I created a new filter on Google Analytics that excludes all traffic from Russia.

After my disappointment, my traffic had one more spike (even with the Russia filter turned on) that sent it over the 100 unique visitors mark.

This was thanks to Steve, over at Think Save Retire, who mentioned one of my most popular posts (Why the 9-5 Concept Is Bonkers – and Why I Quit My Career) on his site. Thanks, Steve! 🙂

Ultimately my daily visits are still way below averaging 100 per day, but I’m working on increasing them. This will be one of my top goals for 2017. Stay tuned!

I fell short by quite a bit on this one! Oops!

In my original article, I mentioned that I had 15 email subscribers – the awesome early fans!

Funnily enough, before the spike in traffic on the 9th of December, I think I only had about 17… Since the initial lead magnet (the offer that I make in exchange for an e-mail address) wasn’t converting too well, I decided to work on creating a new one.

The main focus of this site it to teach you how to quit the 9-5 lifestyle by starting an online business and mastering your money – so I decided to make a nice-looking guide showing the steps.

You can download it below. 😉 It’s a good guide – pinky promise!

This lead magnet is converting at a much better rate than the previous one! I think I just need to send more traffic to my site and let the lead magnets convert visitors into email subscribers.

3. Be featured in an important media publication: FAIL

Bloggers that are making serious money and have made a name for themselves always have some sort of social proof in a highly visible part of their site. I’m sure you’ve seen it – it’s often a box with the logos of all the media outlets that have featured/mentioned them.

It tells new visitors that “hey, this person knows what they are talking about – they’ve been featured in Forbes!”.

I had a coaching call with Bobby from Millennial Money Man back in October and he explained that being featured by big media outlets was key to his success and that I should try my best to do the same.

I’m actually in talks (emails?) with a reporter that seems interested in writing an article about me and my story. That’s for a major media outlet, so I’m hoping I’ll gain some good exposure from it and get my name out there!

If I’m lucky it could even produce a domino effect of media features and mentions which would propel this site!

I thought this was going to be the easiest of them all – but I was so wrong. It ended up taking tens of hours of work to achieve!

You see, the method I used to grow my Twitter audience consists of finding people with large Twitter followings in your niche. Once you have a few influencers , follow a bunch of their followers and hope that they’ll follow you back.

This way you’re getting fairly targetted followers that are probably interested in what you have to say! You can just unfollow those who do not follow you back after a few days.

After a lot of work, I managed to surpass 10K, which felt great! I mean, look at this: 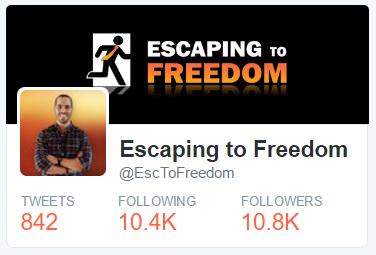 Admittely, getting past 5k followers was a drag. Twitter has a barrier at that means you can only follow 5k people until you get 5k followers.

Say you have 2,300 followers and you’re following 4,700 people. That’s OK with Twitter. If you want to follow more than 5,000 though, you’ll have to wait until your followers reach 5,000 as well! It took me until Somewhere in November to reach 5k followers.

After I broke through that barrier, getting 10k was easy as pie. 😛

5. Reach $500 per month on my Kindle publishing business: FAIL

I have a bit of a love/hate relationship with Kindle publishing.

As I wrote in a previous article, publishing on kindle is a great way to make a fairly passive income rather quickly. It doesn’t require much of an investment to produce an e-book and get it selling. You can also start selling said e-book within hours.

The problem with this business model is that it all depends on reviews.

To have a successful e-book you need to have more and better reviews than the competition – this will rank your book ahead of the competition and onto the top three positions in Amazon’s search results.

As a publisher, there are many ways to get reviews for your books, but what most people do is hire virtual assistants to do “review swaps” with other publishers. A kind of “like mine and I’ll like yours.” kind of thing.

This is a grey area within Amazon’s rules and regulations, and I simply don’t want a business built on a loophole. I’d rather do things the right way.

For that reason (and because I just didn’t enjoy it anywhere near as much as working on Escaping to Freedom) I decided to give up on Kindle publishing altogether.

The good thing is that I still have a passive stream of income from the 7 e-books that I published in the past, so it’s not all that bad 🙂

I reached a ranking of 406,893, which I was thrilled to see! Considering that 3 months prior to this my Alexa ranking was around 600,000, I think I can call this a success. 400k was also a guess, so it turned out to be a pretty accurate one.

The goal now is to keep increasing traffic and get my Alexa Ranking to 200k – the point where many people consider a blog to be big.

I’m pretty happy with this result and, going forward, I aim to keep this success rate.

Going forward (I still sound so corporate!) I’d like to keep a 50% success rate. I’ll publish my goals for 2017 next week, so stay tuned!

Question for you: How was your 2016? Did you accomplish your goals?