You know the drill – you’ve been doing it from the start.

You’re born into a family that only wants the best for you, so they take you to school to get educated on the basics of life and society – so that you can fit in.

After a while, you may begin to wonder why you need to memorise quotes from a Shakespeare play from the 1600’s and how that’s going to make your life any better. “It’s culture”, they’ll say. Although they may be right, thus begins a ritualistic rite of passage in which you have to consistently beat exams that’ll determine your worth for the rest of your life.

Here comes the kicker; once you graduate and get your college degree you’ll need to get a job. Preferably a stable, well-paid job in a field that has enough room for promotion – all the way to the top. You better get cosy – it’s what you’ll be doing for the next 40+ years!

Because that’s what you do.

If you deviate from this formulaic existence and “follow your dreams”, you’ll likely be branded as a failure, a weirdo, or just lazy. Who would want that?! Risk your comfortable and secure life and become a social pariah?!

When I got my first job straight after University I was ecstatic! It was a badly paid internship in a construction company, which was family-run (gah!) – but it was something. I felt like all my life had led to that – all the hurdles, failures, successes and long conversations with my parents about my future.

It was great. I got to wear a suit, use a computer with two monitors, and get a paycheck at the end of every month! Success, right?!

Once the initial “thrill of the new” wore off I started to see the cracks in this concept that we call “a job”.

During the next 5 years of my office-based career, I discovered other “gems” about the ridiculousness of working a 9-5 job in an office. I’m sure you’ll be able to relate.

The most obvious and difficult to come to terms with – at least for me – was the fact that, when you work in an office, you’re stuck in a place where you don’t wanna be. You’re forced to spend most of your waking life in that one place – like it or not.

You may not even have windows nearby to see the outside. They wouldn’t want you thinking about life outside of work (also known as, you know, life) when you should be focussing on filling out that urgent yet completely inconsequential spreadsheet!

I want to share two different defining points of my short-lived engineering career. Each of those planted a little seed of doubt in my head, which ended up blossoming into a full-grown entrepreneurship tree.

If you’re working an office-based 9-5 job I’m sure you’ve experienced similar moments. I feel you.

One afternoon at work I found myself bored and with little to do in the office. It was a particularly quiet afternoon and the office was pretty empty.

I did what any bored 20-something with access to the internet would do; I browsed the internet. I remember I was looking at second-hand cars as I wanted to replace my first car (a trusty Vauxhal Corsa – that car took good care of me!).

Of course, my boss caught me red-handed and asked me to follow him into a private office. Oops!

After the brief telling off about browsing the internet when I should have been doing work, he gave me a piece of advice – the master-to-student type of advice.

He told me that what matters the most at work is what people think you’re doing.

Consequently, I later caught myself pretending to be busy with work (switching between spreadsheets and design software,  idly scrolling through windows without actually doing anything…) while my mind was elsewhere. It was ridiculous.

The worst part was that I realised others were also doing this. Keeping up the appearance so that the bosses realised how busy and valuable they were. Such a ridiculous concept was made worse by how widespread it was – not only inside the company I worked for.

“Be the first to come in. Be the last to leave”

Fast forward a few years, to November 2015, and I was starting my new job near Barcel0na. Now, at this point, I already knew that I wanted to pursue financial independence, but I hadn’t decided that I wanted to start my own business yet. I came in with the idea that I would be able to gain promotions rather quickly, doing a similar job to the one back in England.

On my very first day, I came in at 8:00 am, ready to give it my all, knowing that I’d be able to leave at 5:15 pm. They worked longer Monday – Thursday so that they could leave earlier on Fridays.

5:15 came around and I was exhausted. All I wanted to do was go back home to tell Harriet and my parents all about my first day – and to pass out on my bed. I admit I was looking at the clock, expecting everyone to drop their pencils as soon as the clock marked quarter past.

But nothing happened. People kept working!

A few days later, when I asked a colleague about working times he told me that, if I wanted to get anywhere in the company, I’d have to be the first to come in the mornings and one of the last to leave in the evenings.

Once again, I found myself in a work culture that demands hours instead of actual work. Efficiency wasn’t valued as much as “perceived effort”.

This came to mind: 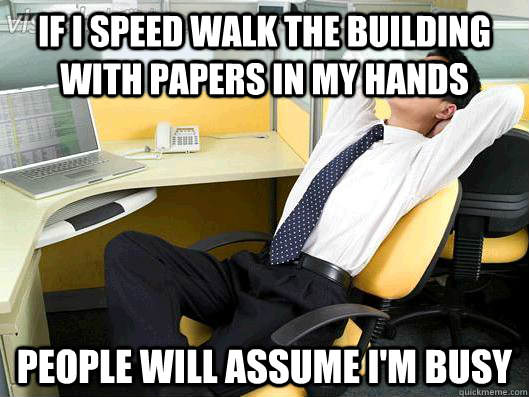 Needless to say, it didn’t take long until I decided I was not going to stay in that company for much longer. I then started to hatch my escape plan to leave the 9-5 altogether (by saving $20,000 in a year) and start my own business.

I’d like more people to deviate from the norm and the apparent stability of a 9-5 lifestyle. Nowadays all you need is a laptop and a bit of bravery to take the jump and use your time for something else that you feel passionate about.

Life isn’t all about work – if it is, you might be doing something wrong… We all need time to play, socialise, exercise and relax. These are all necessary for a healthy mind and body.

We are slowly finding out that people who work less are often happier, which also improves productivity. That’s what some companies in Sweden have been testing lately; shorter workdays of 30 hours per week as well as a maximum of 6 hours a day.

The results? Happier employees who are better rested and are actually more productive.

I can’t say it’s surprising. If companies focused on results rather than overall time spent in the office, productivity would increase. I can’t think of a better reward to completing your tasks for the day quicker and better than getting to leave earlier! Can you?

There’s even evidence suggesting that, before the industrial revolution happened, and more productivity was demanded, people’s working weeks were pretty darn short.

This is your life – spend it wisely

At the end of the day, a job is a means to make money. You need money to survive, and you need some more to feel secure. Anything on top of that is just waste.

Would you go to work for free? Some people would do it because they are getting more from their jobs than money – camaraderie, purpose, power, recognition…this would be a long list.

But those aren’t exclusive of jobs. Once you realise that you can make money in so many other ways and that you can get the positive parts of a job elsewhere, the idea of a 9-5 office job seems obsolete and pretty inefficient.

And if you’ve decided to work towards financial independence like I am, you soon won’t even need to make money. Then you can choose to do anything with your time. Like making the world a better place!

Isn’t that a better way to spend your life?

Ok, now it’s your turn. What do you think about the concept of a 9-5 job? I’d love to hear your views – make sure to share them in the comments below!