Apparently, Albert Einstein once had this to say about compound interest:

“Compound interest is the 8th wonder of the world. He who understands it earns it – he who doesn’t pays it.”

Regardless of whether he actually said it or not, this is one of the biggest truths there is and something that, if understood, can completely change your life.

Until about 3 years ago I didn’t understand it. I had no idea what compound interest even was. I had no control over my finances and spent indiscriminately on things that didn’t directly make my life any better.

Eventually, I would’ve become one more person trapped in a 9-5 job I hated just so that I could pay for my inflated lifestyle.

Luckily, I stumbled upon a Reddit thread that asked: “What do you wish you had learned earlier?”. The highest voted answer was “compound interest”.

Over the next few weeks, I learned about money, investing, and passive income.

I then knew that my life had changed forever.

My goal with this article is for people who are new to the concept of compound interest to get a solid introduction. If this can have as big of an effect on a few people as that Reddit comment had on me, I’ll be overjoyed! 🙂

What Is Compound Interest?

Let’s start with the basics.

This is Investopedia’s definition:

Compound interest (or compounding interest) is interest calculated on the initial principal and also on the accumulated interest of previous periods of a deposit or loan.

In layman’s terms, when you invest or lend your money, it generates more money in the form of interest. By investing the money that you’ve earned, that also starts to make money.

Repeat this a few times and the effects are insanely powerful. Let me show you an example.

You’re a savvy investor and buy shares of companies giving you an average return of 10% per year – including dividends, which you reinvest to buy more shares. This is actually close to historical stock market performance over the last 140 years or so.

This is what would happen to your money:

Or, in graphical form: 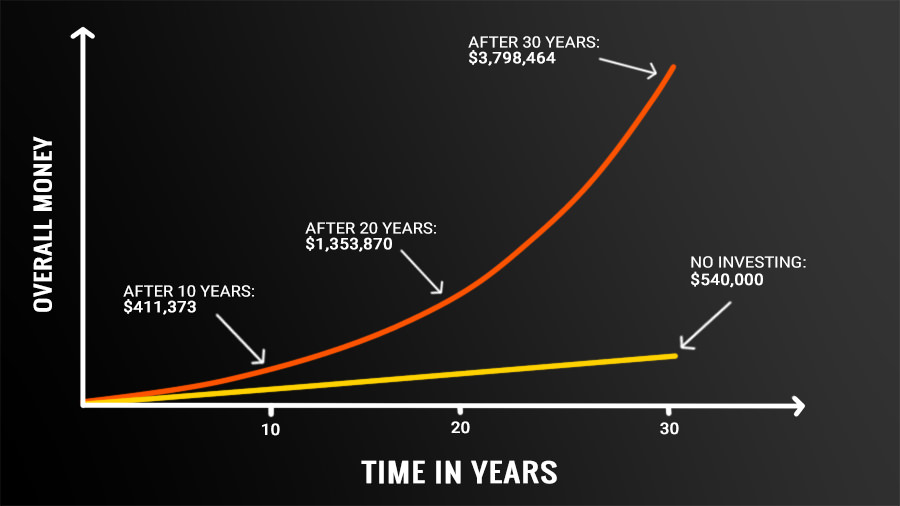 I’ve added a yellow line to show you what it would look like if you kept all your money in a safe bank account, making no money – or, to keep it old-school, under your mattress.

You’d end up with $540,000, which would be 100% of what you put in. Still a decent amount of money, but nothing close to how much compound interest could make it grow!

As you can see, compounding doesn’t yield quick results. The main reason why your money would grow during the first few years would be the $1,500 that you’d diligently invest each month.

After around a decade, you’d really start to see some big differences. After that, the increases would be exponential, making you a millionaire before 20 years had passed.

Compound interest is often compared to rolling a snowball down a snowy hill.

At first, the snowball is tiny and requires a lot of work from you to push it and make it larger. The more you push it, the more snow it captures, getting bigger with each push.

As you keep on pushing and rolling it forward, you start feeling the snowball’s momentum building up. You now don’t have to push as hard to get it to accelerate because it’s picking up speed by itself.

It will get to a point where you can stop pushing and the snowball will continue its roll down the hill without your help, getting huge as it does.

In terms of investment and personal finances, the moment you can let go of the snowball without it stopping is the point when you reach financial independence and you never have to earn another penny if you don’t want to – unless you want to, of course!

Why You Shouldn’t Wait To Invest

Some of the people I know that would like to start investing their money say they’ll do it later. When their circumstances are better, when that promotion arrives or when the economy gets bad again, so they can buy cheap stocks.

Do you know what I tell them?

Even if you were extremely unlucky and bought at really bad and expensive time and the market tanked soon after, the effects would be pretty negligible once 20 or 30 years had passed.

Let’s go back to the previous example.

Let’s say that you’re still investing your $1,500 every month, while one of your friends waits for 10 years before entering the market. His rationale is that he can’t afford to save money and pay off his car and mortgage at the same time.

Besides, he’ll then be able to make up for time lost by investing double what you do – $3,000 a month. At least that’s what he thinks to justify his decision. 😉

Because you really want to prove your point, you agree to stop investing any further money after 10 years. You both also start with 30k.

Let’s see what would happen in this scenario: 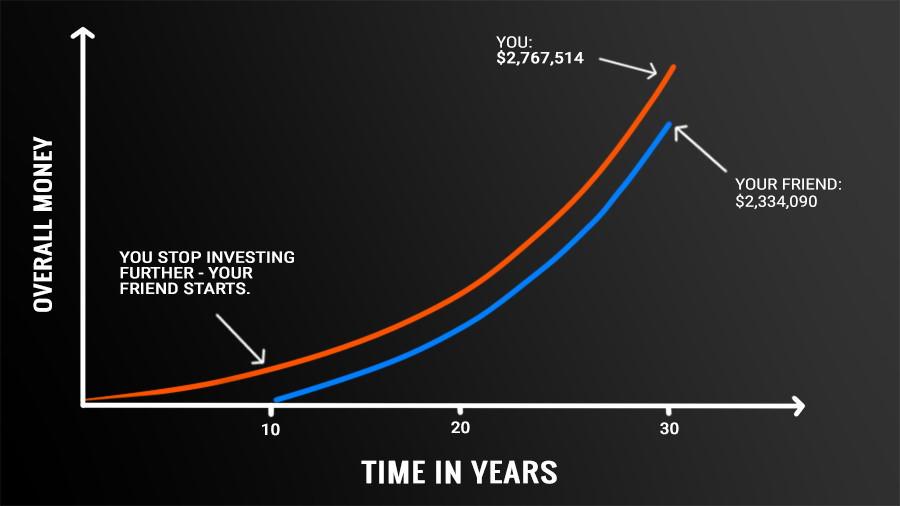 That’s right. You’d end up with more money than your friend – even after 30 years!!

I remember when I first saw an example like this. I couldn’t believe how insane this was! I thought that a 10-year delay in investing would not matter that much since the friend was investing double the amount for double the time!

To put this into perspective, you would have saved a total of  $180,000 during 10 years and then let your money compound for the remaining 20. Your friend in this scenario would have to put in a whopping $720,000 over the latter 20 years!!

You’d still end up with more money than your friend!

If that doesn’t convince you to invest sooner rather than later, I don’t know what will.

The Wrong Kind of Compound Interest

This article wouldn’t be complete without a look at the other side of compound interest. The side that has made poor people poorer through the ages.

This is where the second part of Einstein’s quote, “he who doesn’t understand it pays it” makes sense.

When you take out a loan – anything from an auto loan to a mortgage on a house – you jump to the other side of the compound interest equation. You become the borrower.

Rather than get paid for your investments, you have to pay for someone else’s investment… After all, when you take a loan you’re effectively borrowing someone else’s money, and they expect a hefty return!

Credit card companies have done a great job at marketing their products to make them seem appealing. They’ve normalised borrowing when it goes against many sound money principles.

They’ve got people used to borrowing money to buy things they can’t afford. Fight Club was basically about this.

What if you carried this debt for 30 years, just like in the example above? How much would you owe?

The answer is scary. Cover your eyes if you’re sensitive…

That’s right – if you somehow forgot about this debt and let it compound, you’d make someone very rich indeed!

Compound interest is one of the most powerful forces in our world – it’s the 8th wonder of the world. There is no middle ground – you can either master it or let it master you.

While I agree it’s a little unfair – it’s a model by which the rich get richer and the poor get poorer – it’s probably not going away during any of our lifetimes. So we need to make the most of it and use it to lead the lives we want.

If you find yourself on the wrong side of compound interest and you’re getting grilled by ever-increasing debt, this is what you need to do:

If you’d like to see how your financial future could look like following the process above, check out my Free Financial Independence Calculator:

Now that you know that the 8th wonder of the world is compound interest, do something about it! Start taking advantage of its power and change your life!

Please share this on social media if you’ve found this article useful – I bet some of your friends could do with reading it!