If you want to be free in this world, you need to shift the way you earn money.

If you can do that, you’ll gradually gain the choice and the freedom to do whatever you want with your time.

Do You Think You’re Free?

Most people feel like they are free because they live in a democratic country. They are able to elect their politicians, express their opinions openly, and lead the lifestyles they prefer. They have choice.

While this is completely true, it’s only half of the equation.

There is another type of freedom that most people lack: money freedom.

If you’re like the average Escaping to Freedom reader, you have a 9-5 job that pays you enough to live and even save a little each month.

The money you earn lets you buy all the things you need and some of the things you like. It lets you choose what to do on weekends and where to go on holiday. It makes you feel like you’re free to choose.

But you’re not really free.

You still rely on your job, and it decides most things for you: when you’ll wake up, where you’ll spend 8+ hours a day, and how you’ll have to behave. Without your job, you wouldn’t have the money to live.

In other words, you rely on active income. If you’d stop working, you’d stop earning.

It’s not the worse situation to be in, as you’ll see in a minute, but you can make it better for yourself.

In order to be truly free (3-week-holiday-on-a-whim kinda free) you need passive income.

I think this is a concept that’s best described with a good ol’ graph – although I’ll admit I’m biased, being a massive fan of all things Excel! 😉 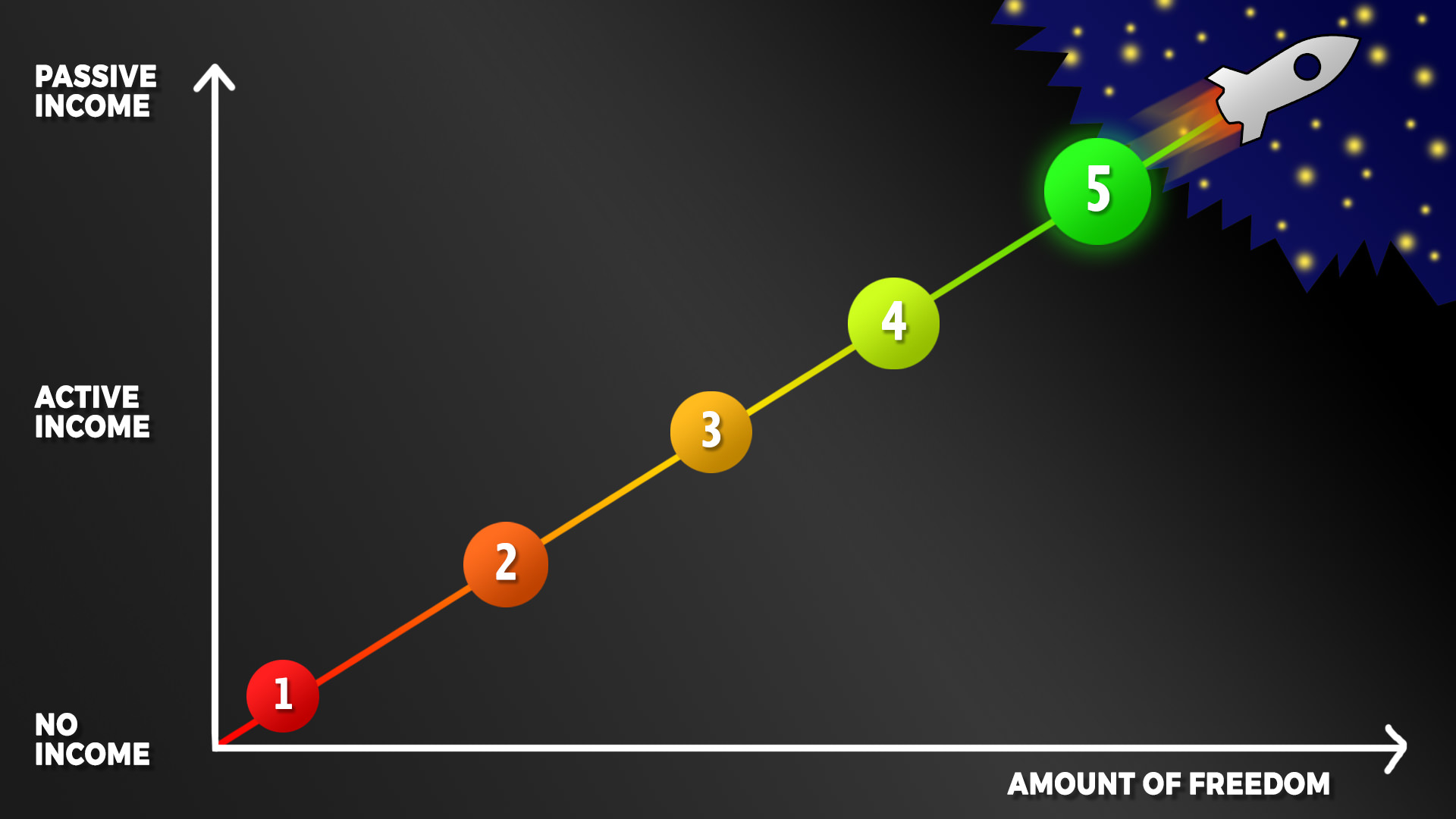 It’s quite simple: the y-axis represents the quality of your income.

The higher the income quality, the better.

The x-axis represents your level of freedom. If you’re all the way to the left (as you’ll see below when I explain what Stage 1 is) you have no freedom at all. You’re entirely dependent on others to survive.

Conversely, if you’re on that rocket in the far right, you’re entirely free. Your income isn’t dependent on your time and what you do. You’re financially independent and as free as you can be.

I think that every adult on this planet falls somewhere on this graph.

Big claim, I know… Let me explain it by starting from the bottom.

I really hope you’re not in this situation, as it’s the worst position you could possibly be in.

You’d have no income and have accumulated lots of debt.

You’d be on the wrong side of compound interest, where your debt would be compounding instead of your wealth. You’d be making the people you owed money to very rich at the expense of your own wealth and freedom.

Without income and with high debt, you’d rely on others entirely, as you wouldn’t be able to keep going alone.

It would be easy to enter a vicious cycle of borrowing more money to pay your existing debt, which would bury you even deeper into debt.

At this stage, you’d be earning some income from your job. You’d also have some form of debt which would be tying you down.

You’d basically be the average American, with a mortgage, car loans, and hefty credit card debt.

You’d be OK month-to-month, but you would not be advancing much financially. You’d still be a slave to the income that your job provided and would be in dire straits if you lost it.

If you’re in this stage, this is what you need to do:

At this stage, you would be completely debt free. You’d also have some savings.

Even if your income from your job wasn’t fantastic, you wouldn’t owe anything to anyone, so you wouldn’t have to desperately find another job if yours ended.

You’d still be hand-tied down to your job, but by a loose rope rather than titanium shackles! Does that metaphor make sense?? 😛

The funny thing is that people in this stage could appear poorer from the outside. They might not be wearing pretty clothes or driving BMWs… but they’d be much better off financially thatthe average person!

Real wealth is measured in net worth, and at Stage 3 your net worth would be positive. Nice!

Stage 4 is where it starts getting really interesting.

At this stage, you have some savings which are generating a good amount of passive income.

You’ve tackled your debt (if you ever had any) and managed to earn more than you spend – again, even if you’re not on a high salary, what really matters is your savings rate.

You’ve been saving diligently for a while and now your savings are working for you.

It’s as though you had an extra member in your family that worked 24/7. It wouldn’t need feeding, shelter, or attention and would pay all its income to you.

You’d be covering a few of your bills and expenses with this passive income, so you’d be less and less reliant on your active income from your job.

If you kept this going, it would only be a matter of time before you reached Stage 5…

Very few people get to Stage 5.

You would not rely on a job because you simply wouldn’t need it! If you never wanted to work another minute in your life, you wouldn’t have to. It would be your choice.

Basically, money would never be a problem again. You’d be the master of money.

You’d have bought the most precious and limited resource that one can have: time.

This would be the time to focus on the things you’ve always wanted to do. Like spending a year learning to sail and then living on a boat for 6 months a year, travelling the world and experiencing other cultures.

Maybe you’re more of an indoors person and your ideal day would revolve around reading books or watching movies. Maybe that would inspire you to start a career as a writer or a film director. It wouldn’t even matter if you never earned a dollar from it!

Being financially independent would also mean that you’d be leaving an incredible estate for your family – and their descendants too! Your stream of passive income would only grow with time, and you’d know that your children would never struggle with money.

Can you think of a better legacy than that?!

How to Earn Passive Income

I know what you’re thinking.

The only problem is that you don’t know how to earn passive income which lets you become freer.

Well, in my opinion, the best way to earn passive income is by investing in dividend growth stocks. I’ve got a six-figure portfolio made up of these kinds of stocks which not only grow in value every year but also pay me hundreds of dollars each and every month in dividends.

If you wanna get started, I’ve put together a free guide that you can download instantly by putting your name and email address below. Check it out:

So, how free are you?

Which stage are you in right now? Let me know in the comments below!